Solidary Affordable Housing for the Houseless

Co-creating & Building Solidary Housing for Homeless: A Model for Mobile Dwelling in the Brussels Capital Region

In the Brussels Capital Region, 44.332 residents are on the waiting list for social housing. Moreover, the number of homeless people increased by 33% since 2010. There is a clear need to develop alternative forms of housing that are better oriented to the housing of vulnerable groups; especially the houseless. In this context, the SWOT-Mobile design-build project aims to address the affordable housing problem by developing, testing and refining a resilient model for the co-creation of solidary living in mobile homes in vacant lots in Brussels. Through the co-creation of eight affordable housing units, this project will develop prototypes of alternative solidary housing. This also includes creating collective spaces, enabling interactions with the neighbourhood, as an essential element. 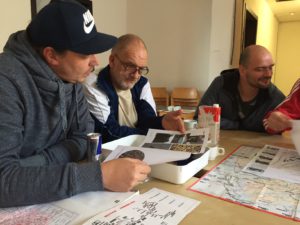 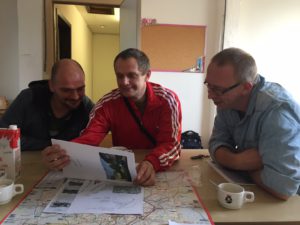 The project brings various stakeholders together in a participatory living lab. This lab will result in the co-creation of a learning space with the houseless. The houseless will take part in the construction of their own home, and get a grip on their life and their housing/living track. Experimental forms of empowerment and inclusion will be explored with a focus on solidarity.

The design of the units will be made in two design studios with the students KU Leuven Faculty of Architecture with the active contribution of eight houseless people under the guidance of CAW Brussels and support of Samenlevingsopbouw Brussels.

The project will provide more than just homes. By temporarily situating on vacant areas, it also aims to address urban issues. By enabling interaction with the urban environment and community it will explore alternative ways to contribute to urban resilience.