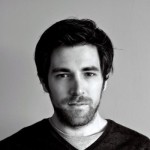 Ferran Massip (1985) is a Doctoral Candidate in Architecture at the Department of Architecture in the University of Leuven, Belgium. He studied in Barcelona and Ghent and graduated as an Architect from Escola d’Arquitectura LaSalle Barcelona, Universitat Ramon Llull (2010).  He has been involved in several research projects as Streetscape territories research project or ADU2020 Alfa project, he collaborated in workshops in Brussels, Barcelona and New York and he currently combines his work in architecture private practice with research.

His research project focuses on reframing the discourse of collective spaces and studying the increasing effect of commercial programs on patterns of behaviour in a urban environment, exploring the formal and informal use of urban spaces influenced by this commercial activities. The project consists out of a systematic analysis of potential urban strategies in a relevant urban projects on an international level to explore the effect of commercial interventions on the urban streetscape and try to unveil the social and spatial qualities.