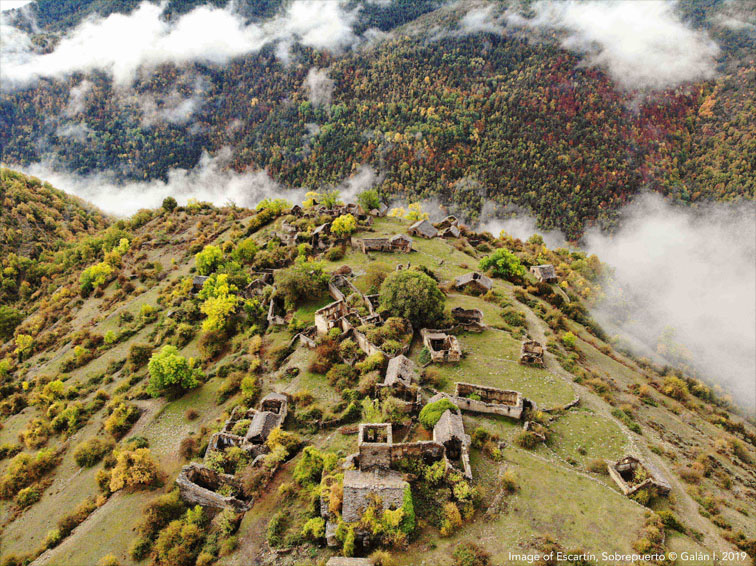 –Language of workshop: English. Some presentations will be translated from/to Spanish.

–No enrolment fee asked. Accommodation and daily personal expenses must be paid by each participant.

–Accommodation: youth hostel in proximity to Biescas, a medium size town located at 10 minutes from the study area.

*Preliminary research and data gathering about the study area is made during the second semester (Jan-Jun 2020) in the Research Elective “Urban Projects, Collective Spaces & Local Identities” from the International Master in Architecture of KULeuven.

“Depopulation of rural areas is an increasing and urgent phenomenon, affecting many European regions and becoming a major challenge” (ESPON Report in Shrinking Rural Regions, 2017)

Rural exodus, linked to socio-economic outdate or decline is a common phenomenon in remote and mountain regions, which are highly vulnerable to these processes. One of the direct consequences of this phenomenon is the abandonment of villages and territories. In the region of Aragón, at Spanish Pyrenees, there are more than 300 documented cases of empty and ruining villages, most of which were depopulated between 1940s and 1970s. In the case of this region, this process was accentuated by national-scale territorial policies to use this mountain area strategically to build dams, and huge reforestation projects, which provoked the eviction of entire valleys.

Depopulation generates certain cultural, economic and social issues, such as disappearance of valuable heritage and cultural landscapes, deterioration of territorial economic networks and loss of identity and memory from this area.

However, increase of urban population interest about countryside, combined with nature regeneration in certain zones have triggered the emergence of different activities in landscape, and the start of several initiatives to recover and reactivate these depopulated territories. These activities social, touristic or productive activities differ much from each other in their interventions on the existing spaces, and are conditioned by their location, history and users engaged.

Despite the high number of empty settlements, a remarkable number of these recovery interventions are found in the Pyrenees, which have not been much in-depth studied. These punctual initiatives are a sign of change of conditions and indicate new possibilities, which conditions and processes could be studied, in order to improve their effectiveness, or to be applied in other similar contexts.

The complexity of this phenomenon and the diversity of topics to which it relates, makes these villages very interesting research labs, where themes from urban and landscape design, heritage preservation/identity and territorial development can be investigated, proposed and discussed. 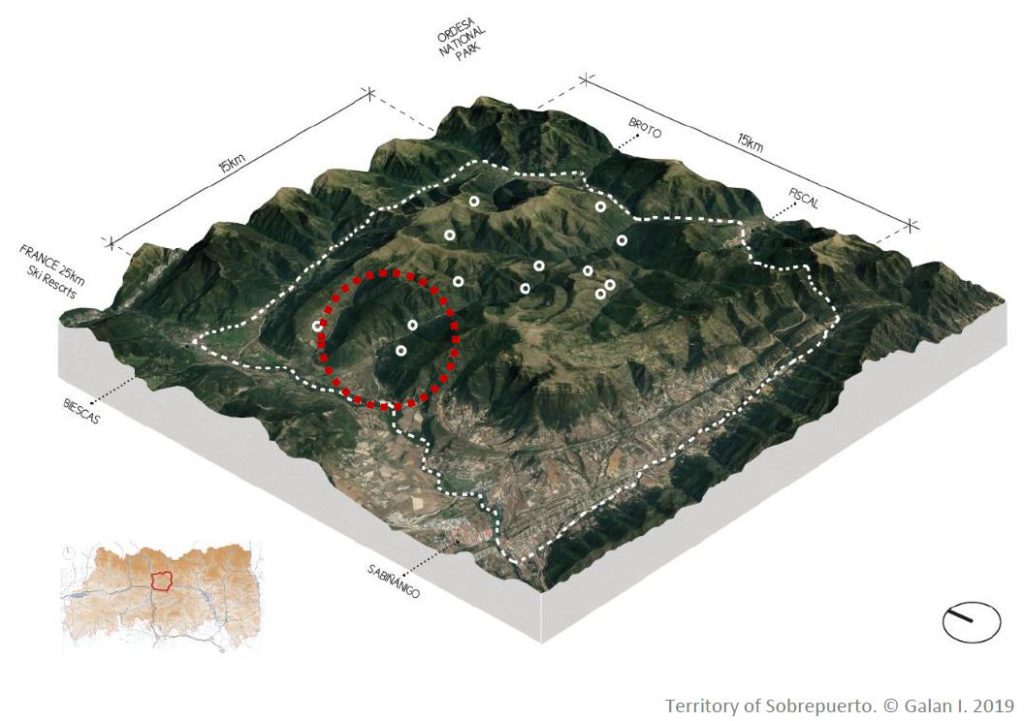 Among all concentration areas, Sobrepuerto is one of the most representative in the Pyrenees, due to its particular characteristics.

Sobrepuerto is a territory of 15x15km, which was completely depopulated in the decade of 1960, due partly to socio-economic extreme outdate and to an ambitious National Reforestation Policy project which evicted many of its villages.

The economy of this mountain region shifted in a very short time period from being strongly agriculture- and farming-based to tourism, being nowadays its dominant economic activity and job source. Only the bottom of the valleys, which bigger and flatter fields could be adapted to mechanized cultivation continued being intensively used, but by a more reduced amount of people. However, most of towns in this lower part increased their size despite their fixed-population shrink, linked mainly to tourism activity and temporary use of them. A big proportion of their inhabitants work on providing service to those visitors.

The cultural farming landscape in the higher and more remote zones, where many of the smaller villages are abandoned, was reclaimed by a regenerating nature which invaded fields and extended, increased by artificial reforestations, transforming very fast the landscape. Most of their buildings, after some years being unmaintained started a process of deterioration and ruin, despite the occasional visits of previous inhabitants and visitors.

However, in the last years, different experiences of recovery and reactivation were initiated, promoted by several types of users and triggered by different interests which in many cases, and under the lack of clear perspective on how to organize this territory, generate conflicts.

Within Sobrepuerto, it is possible to find strong contrasts in a very short distance. Conditions of accessibility, proximity/remoteness, topography, orientation, heritage value, land tenure, landscape characteristics and social engagement determine in great extent the evolution of these places.

At the gorge of Oliván, in only 2’5km there are three completely different cases: a village which was completely depopulated and ruined; another settlement which although depopulated, kept being maintained by its owners and a local community; and a village which lose population, but continued being inhabited, evolving until our days.

In the surrounding areas other types of users are present. From culture-nature bounded tourists (hikers, bikers), to previous inhabitants, cattle farmers, pilgrims or neo-rurals, which visit these places and which use of territory in some cases overlap, in a cultural landscape which present certain qualities but also limitations and which need to be investigated, in combination with its users. 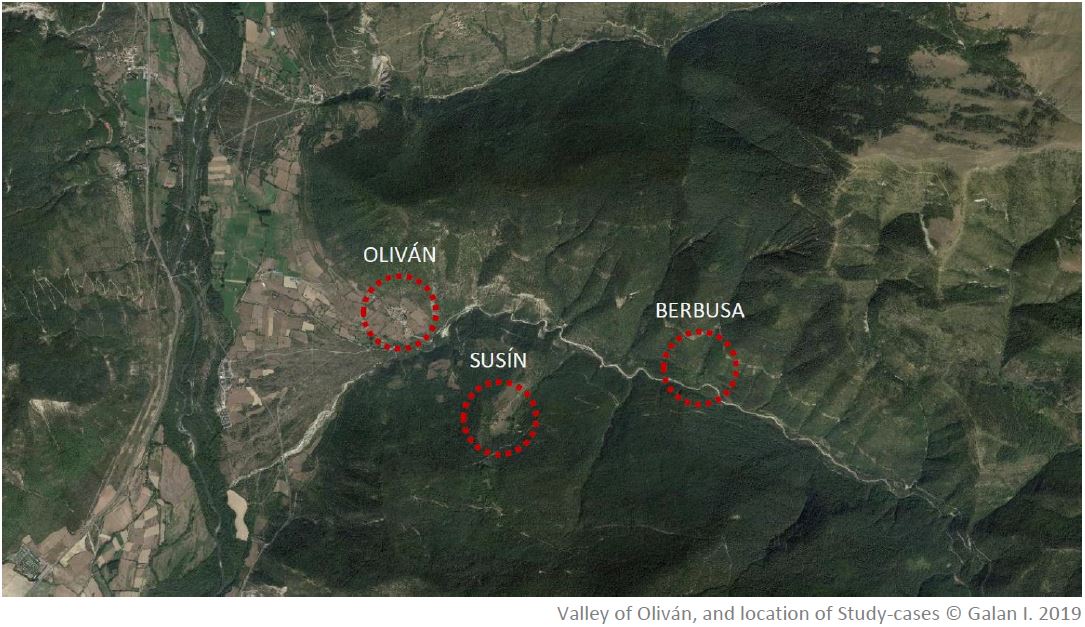 -To organise an international workshop about heritage, cultural landscape and memory, in the framework of depopulated/evicted rural territories in the Pyrenees.

+To map and understand how the territory has physically and programmatically transformed since its depopulation.

+To detect which problematics and opportunities these cultural landscapes in the current changed conditions present.

+To detect possible territorial synergies with other active dynamics in the area.

+To understand the urban structure of a settlement and its relation to its surrounding landscape.

+To analyse the historical evolution of the village from the times before being depopulated until our days.

+To study the state of preservation of main urban structure.

+To detect the present involved stakeholders and their interest/engagement about the area.

+To draw and evaluate the remaining built elements and capacity to be re-used.

+To assess the spatial value of remaining spaces, and the meaning they have for the different users.

+To explore and understand the value and meaning of certain spaces for different involved users, evaluate the state of preservation of remaining elements,

*In order to have a broader understanding of the territory, several locations in the surroundings which evolved differently will be visited, although deeper attention will be set in a specific settlement.

-To synthesize main issues at stake and conclusions from analysis. This understanding enables to list main problems to be addressed and opportunities available, which link the analysis with the proposals.

-To develop intervention strategies at different scales, which can tackle the main issues encountered through the analysis, benefiting from opportunities embedded in the territory, and generating a benefit to the entire area. 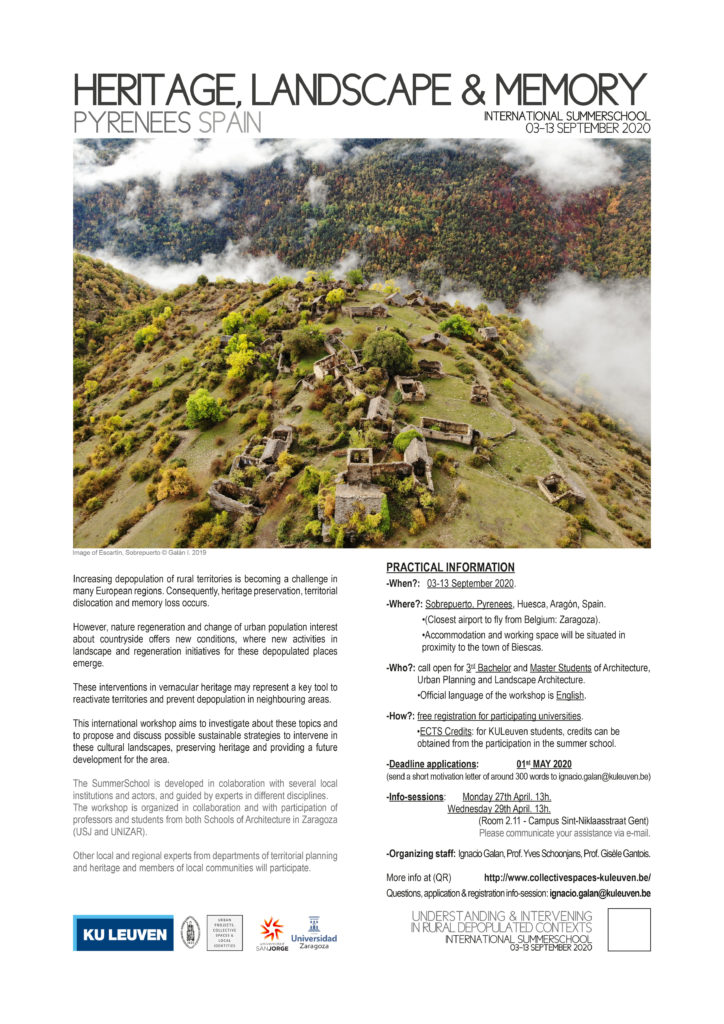