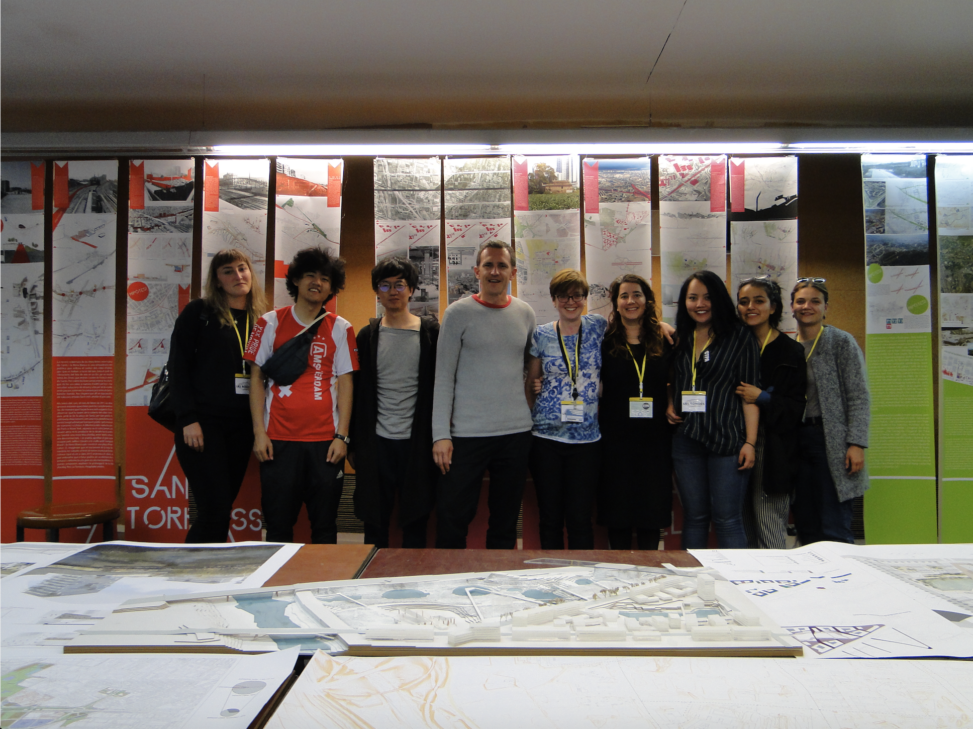 Field trip and Hackató maib14 “BARCELONAs ROUNDS.
Infrastructures as a Tool to Explore the City”, Design Studio by Cecilia Chiappini

From 17th to 23rd October students from the design studio led by Cecilia Chiappini visited Barcelona and took part of a unique event: the Hackató Descobrir les Rondes (In English: Discover the Rondes). This was a joint activity, a sort of marathon, with about 500 students from the 6 faculties of architecture of Barcelona and some international guests (like us). It was organized by “CTPA-Corporació de Tallers de Projectes Arquitectónics” (In English: Corporation of Architecture Design Studios) in partnership with institutions such as the Municipality of Barcelona, Barcelona Regional (the agency within the municipality that targets the metropolitan area). Moreover, it was part of the “Biennal del Pensament: Ciutat Oberta”, (in English: Thinking Biennale: Open City”), that counted with the presence of Richard Sennet and many other national and international figures.

The occasion was the 25th anniversary of the construction of the infrastructural network of highways around the city of Barcelona, called “les rondes” (in English: the rounds). Students were summed up to experience their 36.5 km and to collectively rethink and exchange ideas on urban architectural design possibilities around them. For 3 intense days (19-21/10), students moved around the city, stopping at critical points of the infrastructural device that they reached by bike or public transport. In every stop a series of activities were proposed: presentations from local experts and key politicians (the mayors of Barcelona, Hospitalet and Santa Coloma, for example), critical debates, students work discussions, good food and music. The weather played its role providing a sunny and warm environment during the entire time. A boat trip along the cost of the city was one of the highlights.

Taking this unique chance and articulating it with the Design Studio research and pedagogical aim, students focus on the current conditions of the highways as generators of urbanity and triggers of architectural design interventions that embody visions at metropolitan and urban scale. During the entire semester, they are working on the accessibility of central residential and business areas from/to the North-East with the consequent crossing of the city: the link between the roads along the East margin of the Besos River (Ronda Litoral-B10), with entrance though Via de les Corts Catalanes (starting from the regional access C31) and the city centre, via Glories Square. Along this access, major transformation processes are taking place: 22@, La Sagrera High Speed Train Station, Forum, Glories Square. On these areas they were doing extensive field work after the hackató. The setting provides unique chances to explore of the interfaces of infrastructures and urban space at different levels.

Academic links were established with Profs. Felipe Pich Aguilera/Jaime Batlle/Iñaki Baquiero with their 30 students from UIC (Universitat Internacional de Catalunya) working on the northern side of les Rondes; and with Prof. Ibon Bilbao from ETSAB-UPC (Escola Tècnica Superior d’Arquitectura de Barcelona-Universitat Politècnica de Catalunya), with his 60 students, working on the West side. The link will be reinforced along the entire semester via shared reviews and exchanges. Finally, Patricia Tamayo, academic staff from UIC and Phd Student of KU Leuven acted as a local contact and supported us to ensure the total involvement between local and KU Leuven students. A big thanks to her effort and commitment. A big thanks to all participants and organizers. 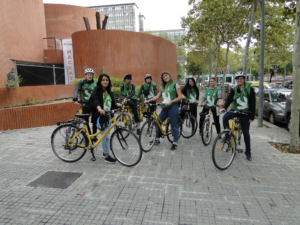 The KU Leuven committee is ready to depart. 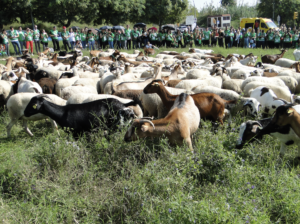 Some stops included the presence of “other” users. 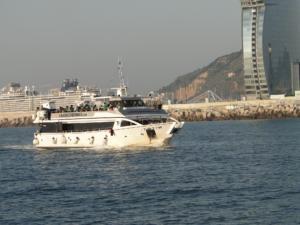 One of the boats full of students. 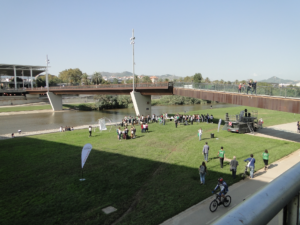 The stop at the Besos river. 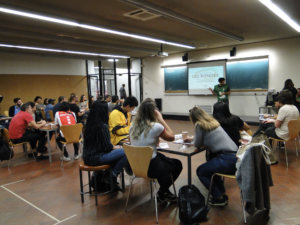 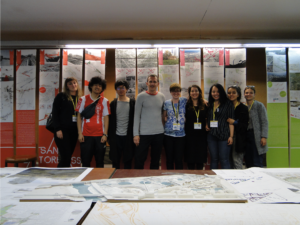