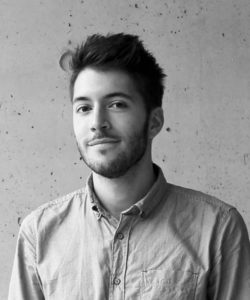 Ignacio Galán (Huesca, 1991) is a Spanish architect, living and working in Belgium. He graduated in Zaragoza at San Jorge University (2015) and completed his Master in KU Leuven (2016).

Passionate about architectural heritage and landscape, he developed his Master’s Thesis in KU Leuven about the old docks of Merksem , Antwerpen. In his project “Bringing back the dok. Industry and public space in symbiosis: Merksem case”, he explored the coexistence of life and work in a humble neighbourhood, motivated by the discovery of an old postcard which showed how this happened in the past, with a new understanding of the needs of an outdated area, and giving and answer which could respond to this needs, while enabling the industry to keep on working and respecting the identity of the place. His project obtained the Van Hove Prijs 2016.

His current research is linked to a phenomenon which he studied on his graduation project from Zaragoza (2015) “Thermae: reviving Tiermas”. This project looked for an answer to the depopulation of one of more than 300 villages on the Spanish area of the Pyrenees in the region of Huesca, trying to revitalize it and bringing life back to them. Most of these settlements, founded on Middle Ages and even from roman times, were abandoned for several reasons during the 40s to the 80s, and their rich architectural heritage and history is getting lost, on a continuous fight against time and nature.

Along with his research, he works as collaborator for an architecture firm in Gent.

This PhD is funded by an FWO Fundamental Research Grant